Obama’s inactions in Afghanistan are actions 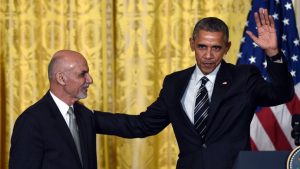 Unfortunately, this was not in Obama’s agenda, in fact the Obama administration distanced itself from Pakistan. Pakistani-American relations have been diminished, but Obama disregards the implications, and did not provide the necessary military support for the Afghan government to defend itself. These inactions by the Obama administration facilitated the wilful blindness they had on Pakistan’s deceptive policy on Afghanistan. The directness and increase in the sponsoring of insurgents such as the Taliban and Haqqani network are correlatively related to the distancing relationship between the United States and Pakistan.

The vicissitudes of this dynamic relationship which are also dependent on many other geopolitical issues, puts Afghanistan in a vulnerable situation. The worsening security situation will lead to economic strife, if it has not already happened. The Afghan economy is already severely underpinned by foreign aid, and if the level of development gained during the past 15 years starts to deplete, then the natural next step is Afghanistan once again becomes a failed state. A domain where Afghanistan has been before.

Afghanistan could have been a Cinderella story for American intervention, it could have been a remarkable Cinderella story since on many instances when America has intervened it brought more war than peace. To the demise of the Afghan people, Afghanistan is just another country America failed to implement their perceived way of democracy. Their antithetical natural of intervening brought more war and destruction to a nation that had high hopes of peace, prosperity and stability.

If Hillary Clinton does become elected, she will continue the Obama policy through a more hawkish lense. For Afghanistan the status quo will continue until the United States with a rudimental demeanour starts a discourse with Pakistan with respect to their on-going strategic funding of insurgents in Afghanistan.

For the abecedarian Afghan government, the task is simple, but important, and it is to survive the attacks. It must also work to unite the country, fight a war, and continue the rebuilding process. Nothing less than a daunting task.