Ghazni in the grip of Mafia, Corruption and Insurgency 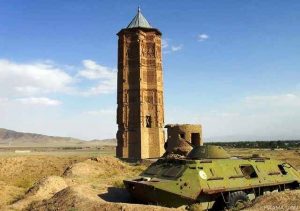 Ghazni, only 134 kilometres southwest of the Afghan capital, Kabul, is one of the most insecure provinces in the country. The prevailing insecurity in Ghazni is a product of interactions between mafia, corruption and insurgency. Ghazni residents say that weak governance and the excessive influence of land mafia on government departments have led to widespread corruption and nourished insurgents. It has also nearly paralysed the government departments and created a gap between the people and the government.

“Corruption in our judicial and justice departments has reached its peak,” Mohammad Ali Ahmadi, deputy governor of Ghazni province, told a news agency.  “The judicial department, under the pretext of being independent, has tied up our hands and we cannot take any action against them,” Ahmadi said and added, “The judicial and justice departments in Ghazni violate the laws and through their support most of the government land has been seized by the “land mafia” and members of the armed opposition groups and abductor gangs are released from the jails.”

Several land mafias have been operating in Ghazni province with the support of some parliamentarians, ministers and politicians in Kabul. According to the local residents, one of the most notorious land mafias is led by Khalilullah Hotak, who has well-built connections with some of the ministries, politicians and members of the parliament in Kabul as well as with some of the local authorities in Ghazni.

Many people in Ghazni accuse Khalilullah Hotak of illegally seizing about 2,000 of jeribs of the government land and building on it Sultan Mahmmud-e Ghaznawi residential township. “He has been trying to grab hundreds of jeribs of public land through some forged and fraudulent documents and bribing some of the high-ranking government officials in both Ghazni and Kabul,” said Ahmad Gul a resident of Ghazni: “But the owners of the land have resisted for the past 12 years and they will continue defending their land at any cost.”

Most analysts believe that the mafias scratch the back of the government officials as well as the back of the local insurgent commanders while they scratch the back of the mafia groups and allow them to carry out their businesses as usual through illegal ways. Close interaction within this triangle has consumed most of the resources, slowed down the completion of developmental projects and encouraged the insurgents to use some extra force, now and then, to maintain and even further strengthen their dominant position within this nefarious triangle.

In September 2014, about 20 heavily armed insurgents targeted the provincial National Directorate of Security (NDS), the Afghan National Police Quick Reaction Forces and the provincial Information and Cultural Directorate compounds in Ghazni city. About 13 security personnel were killed, over 100 other people were wounded and most of the offices and nearby shops were destroyed when the suicide bombers detonated two motor-bombs near the entrance gate of the NDS and the Quick Reaction Forces headquarters.

Later on, NDS officials told reporters that six of the suicide bombers were from Pakistan. Before carrying out the attack in Ghazni, NDS said, the suicide-bombers were trained in Quetta, the provincial capital of Baluchistan province in Pakistan.

Ghazni is located on a plateau at 2,219m above sea level with a population of about 1,600,000 (there are contradicting figures) and an area of 23,378 square kilometres. Ghazni has 16 district administrations and it is linked with Kabul to the northeast, Gardez to the east, Zabul to the southwest, Urozgan to the west, Bamiyan to the northwest and Maidan and Wardak to the north.

The highway between Kabul and Kandahar, may be one of the richest mineral regions in the world according to the results of assessments carried out by the United States Geological Survey (USGS). It is believed that the brine lakes in Nawer and Nawa districts, in Ghazni, contain some of the world’s largest known lithium deposits. Gold and copper deposits in the Zarkashan area of Ghazni are valued at approximately US$30 billion. Together with other newly discovered deposits countrywide, Afghanistan’s mineral wealth is estimated between US$1 to three trillion, with Ghazni holding a large percentage of that wealth.

The Cultural Ministers at the sixth session of the Islamic Conference in 2009 in Baku approved Ghazni to be the Capital of Islamic Culture for 2013. This was part of the Islamic Educational, Scientific and Cultural Organization (ISESCO) program for 2005-2024. About USD15 million was given to the Afghan authorities for the renovation of historical monuments in Ghazni, according to some media reports, as well as the inauguration ceremony on the 13th April 2013 to formally name Ghazni as the Capital of Islamic Culture. An additional EUR 1.7 million was given by the government of Germany for the preservation of historic monuments in Ghazni. But most of the Ghazni residents wonder where all the money has gone as nothing has been done there.

The next governor of Ghazni will not only need to make great efforts to win the hearts and minds of the residents, in order to win back their trust, but also to restore peace and stability through the means of  disrupting  interactions between the mafia, corruption and insurgency triangle and improving the performance of the government institutions in reactive. The new governor will also have to reactive the district headquarters which are currently closed down due to various reasons and ensure that the fully functional government offices, at the district level, handle the needs of the local residents and ensure security.

Moreover, the governor should vigorously fight corruption at all levels in Ghazni, and the government authorities should also repossess the ownership of thousands of jeribs of the government land. They must also deal with the mafia ringleaders in accordance with the law and disarm all illegally armed groups operating in and around Ghazni.

The governor needs to ensure that all developmental projects are implemented within the budget and time limits according to the plan and specifications, and all contracts and sub-contracts procedures are transparent.

Finally, the governor should fully support small businesses and increase the number of developmental projects to create job opportunities for the local residents. This will keep the youth away from joining the ranks of armed opposition groups, the mafias and other criminal gangs in Ghazni and it will also contribute to the economic growth of the province, which already possesses very good resources and the talents.