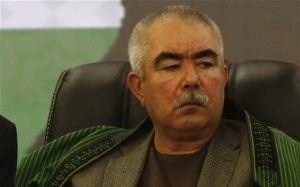 The first Vice President Gen. Abdul Rashid Dostum warned regarding serious threat of the Islamic State of Iraq and Syria (ISIS) to Afghanistan.

Speaking during a ceremony to mark the Nowruz – New Year, Gen. Dostum said the presence of the terrorist group in Afghanistan is a serious threat.

The remarks by Gen. Dostum comes as President Mohammad Ashraf Ghani said earlier last month that the global terrorism including al-Qaeda and the Islamic State of Iraq and Syria (ISIS) stills threatens Afghanistan.

Speaking during the Munic Security Conference in Germany President Ghani warned that there would be consequences if Afghanistan is ignored and the international community shifts focus.

He said the ISIS (Daesh) group is quickly moving to a stage in Afghanistan where it is able to organize, orient, decide and take actions.

In the meantime, the Secretary General of the United Natoins, Ban Ki-moon said earlier this week that the former Taliban commanders in Afghanistan have pledged allegiance to the Islamic States and the number of their supporters is on the rise.

Concerns regarding the expansion of ISIS activities in Afghanistan further escalated after after unknown masked men kidnapped 30 passengers in southern Zabul province last month with reports suggesting that the militants belong to ISIS terrorist group.

At least two commanders of the ISIS terrorist group have been killed by the Afghan security forces so far which includes Mulah Abdul Rauf and his successor Hafiz Wahid.

Mullah Abdul Rawouf was the first Islamic State commander and recruiter who was killed along with five of his companions in Helmand province last month.

Following the killing of Mullah Abdul Rawouf, his nephew Hafiz Wahidi took the command for ISIS who was also killed along with nine of his companions in Afghan National Security Forces operations in Helmand province.