A fundamental social dilemma or a few bad apples 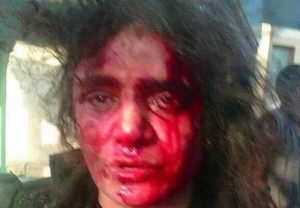 The incident in Kabul which took place, where a woman was beaten and then burned raises a critical question, can the whole population consensually frown upon and denounce the act? The individuals beating, kicking, using tree branches to beat the woman then running her over with a car, did not just pick up this sort of behaviour from thin air. Hundreds proudly participated and admitted to their heroism, proudly undermined the law of the land and basic human morals. However the advocating atmosphere for belligerent behaviour that we have built for ourselves needs immediate attention. The brutality with unfathomable anger has to be examined, where is this anger coming from?

Burning the Holy Scripture is illegal in the Islamic Republic of Afghanistan, however if the religious scholars do not have belief in the Republic to enforce law. Then we are in the midst of a chaotic and anarchical society, willfully blinding ourselves as subordinates to Mullahs and Religious Scholars who have nobody to answer to. It is a catastrophic imbalance in the society with implications that results into acts such as these. It took over 14 years for religious leader to denounce Taliban suicide bombers, how long it will it take for these religious leaders to denounce the incident yesterday?

Religious leaders have become above the law, better yet they are the law. A society they have constructed composed of angry individuals, reduced to hate and who inhumanely use violence acts to gratify their importance. Poisoning the masses to not define heroism through superseding in intellect, innovation and salvation but through livid viciousness. Therefore it does not surprise me that, not one has spoken against the brutality of yesterday. Mindful of the lethal embracement of violence that has integrated into the society, it is safe to say that the individuals who participated yesterday, are just a product of their environment. Pointing fingers at a few who happen to be there can only bring temporary solution, which will silence the concerned population. However if we truly would like to bring social reform, we must not overlook the critical issues. Assuming we have the honest and motivated intention of solving and not temporarily fixing.

Breaking taboos and cultural beliefs for the sake of humanity, for the sake loving to live and curing and rehabilitating the ill has become foreign to society. Simply ending someone’s life because they were not strong enough to be well has become reality. What happened in Kabul city, was not only disturbing beyond imagination, it also showcased a fundamental issue. So how long will we ignore for the sake of not breaking cultural taboos and traditions?

Peculiarly enough, we have all adopted the notion of hate and are in the midst of an everlasting war against the Taliban. We deprecated them as enemies of the State. Everyday brave soldiers, who have become our blanket of freedom, fight against the Taliban. Weirdly enough we deplore the Taliban because of their interpretation of beliefs, but yesterday I didn’t see the difference between a Taliban and Kabul resident.

A cancerous thought that has integrated into our society deeply, is the lack of value of life. We execute before any attempt to rehabilitate. Is living just not important anymore?