Top Pakistani terrorist killed in US forces raid in Afghanistan 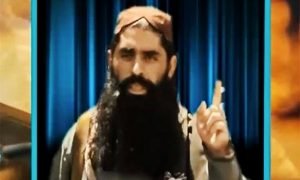 A top Pakistani terrorist has been killed in a drone strike carried out by the US Forces in Afghanistan, the US Department of Defense (DoD) confirmed Thursday.

Cook further added that Khalifa was a terrorist leader with the Tariq Gidar Group.

According to Cook, Khalifa orchestrated multiple terrorist operations in Pakistan to include the January 2016 attack on Bacha Khan University, the September 2015 Badaber Air Force Base attack, and the December 2014 Peshawar school attack that resulted in the deaths of more than 130 children.

While this strike was taken pursuant to U.S. rules of engagement and counter-terrorism interests, the specific relevance it has to Pakistan’s and Afghanistan’s security underscores the common security interests shared by the United States, Afghanistan, and Pakistan on matters of terrorism, Cook continued.

“The United States maintains a robust counter-terrorism partnership with Afghanistan and Pakistan,” Cook said, “and we recognize the sacrifices made on behalf of our respective militaries to pursue terrorists for the sake of regional peace and security.”

Cook added, “Only through continued cooperation will we collectively succeed in eliminating terrorist safe havens in the region. In this regard we also recognize the importance of Pakistan’s chief of army staff’s recent directive to all commanders, intelligence agencies and law enforcement agencies to take concrete measures against those who would attack Afghanistan.”

A White House statement stated that US President Joe Biden on Friday revoked the status of Afghanistan...