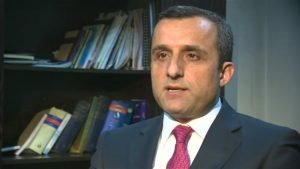 The former head of the National Directorate of Security (NDS) – Afghanistan’s intelligence agency – Amrullah Saleh says that Islamic State is not a reality and it is “psychological warfare”.

Amrullah Saleh has told Radio Free Afghanistan that whatever ISIS is doing Iraq and Syria, Taliban are doing that in Afghanistan.

“In reality, Daesh (the Arabic name for IS) will not be able to gain influence or spread roots here, because whatever Daesh has been doing in Iraq and Syria, the Taliban have been doing the same in Afghanistan for the past 20 years. The only difference is that the Taliban never executed their prisoners in orange jumpsuits.”

“Another reason that Daesh won’t be able to establish a firm footing here is that it is a Salafi or Wahhabi organization, most of whose leaders are Arab. Their leaders are in Iraq and Syria, and they are not able to attract and recruit many Afghans.”

Amrullah Saleh has said that ISIS is rejected by the people of Afghanistan.

“To date, Afghanistan’s people have rejected the violent [IS] movement”.

ISIS controls large swathes of land in Iraq and Syria where they have carried out atrocities. Taliban leadership has also ordered fighters not to let ISIS operate in Afghanistan.