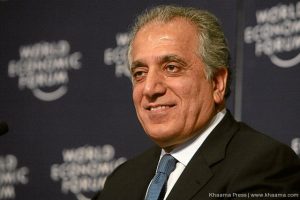 Zalmai Khalilzad former US ambassador to Afghanistan and Iraq and one of the members of the Republican party is due to nominate himself in the upcoming presidential election in Afghanistan.

A source close to Mr. Khalilzad speaking on the condition of anonymity told Khaama Press, “Afghanistan will need serious cooperation from the western nations specifically United States of America in the future and Mr. Khalilzad will be one of the reliable individual for Afghanistan beyond 2014, and therefore he will nominate himself in the upcoming presidential election.”

He said, “Mr. Khalilzad has full support of the Republicans who are having major seats in the US congress and this will definitely be one of the main opportunity for Afghanistan’s future since Khalilzad will also be supported inside the country. He will have major programs for the presidential election and currently he is holding talks with the political parties but he will announce his nomination in the near future.”

The source also added, “Mr. Khalilzad is currently negotiating with various political parties in Afghanistan and he has met with Gul Agha Sherzoi and Mahmood Karzai and has discussed the upcoming presidential election.”

He said Mr. Khalilzad has also met with a number of the former Mujahideen leaders and has indirectly negotiated his nomination for the upcoming election.

This comes as Wall Street Journal earlier also published a report which informed of Mr. Khalizad’s meeting with various political parties in Afghanistan to discuss the upcoming presidential election.

According to reports the electoral office of Zalmai Khalilzad is informally operating in capital Kabul where thousands are visiting his office on daily basis. The individuals who are coming from various provinces of Afghanistan are reportedly meeting with the head of the Khalilzad’s electoral office in Kabul city.

In the meantime reports also suggest that the electoral office of Zalmai Khalilzad has created a number of committees and has indirectly contacted with a number of the private media agencies to broadcast reports regarding his nomination.

Ehsanullah Bayat a member of the Afghan senate house and owner of the Ariana Television is said to be one of the individuals who is assisting Zalmai Khalilzad with his indirect presidential election campaign.