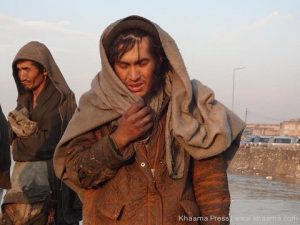 “I am happy to die rather than to be alive. If you wish bad-luck to your enemy wish him to become addicted to opium or heroin, as there is no other greater punishment rather than being addicted.”

This is what Noor Mohammad said from Kapisa Province Afghanistan . Noor has been using opium since 12 years. He is the oldest among his brothers, and is beaten and shackled several time to quit using drugs by his Youngers bother, who are now taking care of their family.

“Quitting drugs is something out my hands now.” Says Noor.

As Noor, nearly one million youth in Afghanistan have lit fire to their lives being addicted to Heroin, Opium and to others drugs. They go to Pakistan and particularly Iran for work, and return addicted to drugs. This young man, wearing reddish jean look clean than the others. He has gone to Iran for job, but instead addicted to opium by his friends. He is now smoking heroin, and says. “His family doesn’t know about him smoking heroin.”

“I leaves home every day pretends I am going to find a paid job but when I come here I use drugs.”

Mohammad Gul, from Kapisa Province , who once was not even smoking cigarettes but become addicted to Heroin at Iran by his roommates. He says. “A friends offered me a cigarette without letting me know it was Heroin not tobacco in the cigarettes. Since then I am addicted to drugs. I fell pain all over my body if I don’t use drugs now. In Iran suing Drugs is a tradition.”

The known reasons behind youth addiction to drug in Afghanistan are unemployment, wars, and family’s problems. Baba Jan has also left Afghanistan to Iran in hope of a good job. During work hours friends were proposing him poppy for extra energy to work extra hours and would be able to earn more money. He did so as his friends’ proposed. After returning to Afghanistan his wife noticed that her husband is addicted to drugs. She divorced and left here two children to him as well.

Base on a research the Deputy Chief of UNODC in Kabul Ashita Mittal says: “Afghanistan is producing 80% – 90% of the world’s opium and it’s per sure what ever country cultivate drug the residents of that country will be using it as well.”

She adds: “Even though 4.6 Million refugees have been returned to Afghanistan but it doesn’t mean whoever have been to other country they return addicted.”

According to the addicted youths’ information they are paying AFN 150 for one packet of Opium.

Where are those money coming from?

One of the addicted, Baba Jan says: “Today I stole AFN 100 to buy opium or heroin, I just smoked it and have diminish my body pain with, and before I was stilling a blanket everyday valued AFN 1,200 from my home and was selling it for AFN 300 – 400.”

“I borrow money from a friend and I also work.” Said Gul Mohammad.

Another one who did not want to be identified said. “No one give us a job, so we have no others option, but to rob. I use, sell and buy heroin now, this is what I am doing as my business now”.

At Kabul Drugs dealers and users are based at Bagh-E-Ali Mardan, Pul-E-Sukhta and at some others locations. They have also built their own living spaces at the desiccated parts of Kabul ’s river. That is where they cover their faces with scarfs, using drugs and sleeping on top of garbage.

Murad Khani Bridge is just about a Kilometer away from the presidential palace, last year few addicted were flood-died here.

One of the drug user’s brother Zabiullah says: “He has treated his brother several time but he is reusing, while he sees others using it and it’s also very easy to find.” He was criticizing the government for not being so active to prevent drugs’ deals in the city.

Dr. Tawfiq Mashal, Director of Drug Prevention Ministry of Public Health says: “They have 105 drug users’ treatment centers countrywide and 28 out of those are located in Kabul . All those centers have the capacity of treating 20,800 persons per year.

Will 105 drugs users’ treatment centers have the capacity to treat one million drug users?

This might be the case people like Gul Mohammad who wants to be treated, don’t even know if the centers are exists or it might not be his turn yet.

“Where are the drugs users’ centers located, I want to be treated there?” Asked Gul Mohammad

Ashita Mittal, the Deputy Head of UNODC Kabul Office Said. “We have conducted an assessment together with two others Organizations, UNHCR and IOM at Kabul , Parwan, Jowz Jan, Baghlan and Hearat Provinces and here is the basic result of the assessment.

First 30,000 of the returnees are addicted to Heroin. Second 8,000 are using injections and out of the eight thousands 2,000 share injections witch is the key reason for HIV transmitting.”

She says: “7% of those drugs users who are using and sharing injections are affected by HIV at Kabul , Heart and Mazar-E-Shrif provinces.”

She further adds: “Base on a research 10% out of around one millions addicted have access to drugs users’ treatment centers and 2.3% of under age 15 are addicted to opium.”

During a ribbon cutting ceremony held a while ago at Jangalak area of Kabul for a 300 beds refurbished drug addicted treatment Center . Kareem Khalili the voice president of the country called youths’ addication a silent tsunami.

Numbers of drugs’ addicted are now under treatment in this center and Sarfarz from Helmand is one of them who had no other option but to come to the treatment center.

He adds: “being under treatment in the center has given him a new life.”

I left Jangalak to a privet addicted treatment center (Nejat). When I moved in to the building, I heard noise coming out of a room, and noticed that someone is singing and others are clapping for. When I moved closer the singer was singing (oh youth, oh youth, stop using drugs, if there are no youths who will be building this country) some of them ware clapping and the others were dancing.

Talking to one of them who was pretty happy with the center’s services, Doctors’ and trainers’ behaviors.

“Now if I became sad, I am not heading to back drugs I am staying here for entertaining and learning some skills.” Said Peer Dil.

The Doctor incharge of the center Tariq Sulaiman says. “We are not only treating the addicted but teaching them some vocational skills as well, and then sending them back to their families.”

Dr. Tariq added. “We have even recruited some of the addicted after curing in the center but the most important thing before the treatment is good behaviors to win their hearts.”

The Ministry of Labors, Social Affairs, Martyrs and Disabled (MoLSAMD) authorities say: “The Ministry has brought together 943 drugs users since last year by 9 drugs users collecting campaigns. They either have been send back to their families or have been introduced to vocational institutes for training”.

According to Dr. Inayatullah Mayel the Executive Director of National Skills Development Program (NSDP), there are lots of requests and expectations with limited availabilities.

He also adds: “90% of opium have been producing at Helmand, Kandahar, Farah and Urzgan Provinces while others 10% are coming from Dai Konde, Badghis, Nimroz and some others provinces of the country.”

Lieutenant general Abdul Khalil Bakhtyar, the General Director of Counter Narcotics Ministry of Interior Affairs said. “Around 3 million people are involved in drug trafficking across the country and meanwhile opium cultivation has been eradicated in 17 provinces and 8 out of 10 top drugs’ traffickers have been arrested last year.”

In the Afghan society addicted have not been respected very well. People have been beating them, throwing stone at them and insulting them.

Gul Mohammad is complaining from his family and Says: “Before being addicted I was well respected at home, whenever I would have not liked the food already prepared at home I reject eating it and was asking my mom for a different kinds of food and she was serving it me.”

“Since I’ve been using drugs no one from my family is treating me as a human being” Said Gul Mohammad.

Professor Sharafuddin Azimi, lecturer of Psychology Faculty at Kabul University says. “Drug Users are sick, the need to be well treated by their family and if we want them to stop using drugs we should treat them with love.”

Mohammad Hotak, had used heroin for 10 years and now he is not using it anymore and requesting the others addicted to quit using drugs because drugs disrespects peoples’ personalities among friends, families and in the society. According to Hotak, they should just come up with a strong plan and must go to the treatment center to stop using drugs.

A UNODC research indicates 154000 hectares arable land estimated in 2012 for poppy cultivation and it has increased to 18% compared to the last year. 95% of poppies cultivation took place at insecure southern 9 provinces of the country.  The research also shows that 64% of the world’s poppy cultivation in 2012 has took place in Afghanistan .