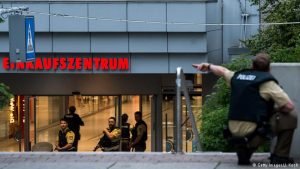 A young Afghan refugee has been hailed as a ‘champion’ following the Munich shooting that left at least 9 people dead, an attack that was carried out by a German-Iranian.

According to the local media reports, the 20-year-old Amir Najazada was hailed for saving nearly 200 people by shifting them to the underground of a shopping mall.

Najafzada was reportedly working as a security guard in the shopping mall and helped to shift around 200 people to the underground of the mall after hearing the gunshots that sparked panic among the people.

“All of a sudden around 150 to 200 people entered the mall as they were frightened,” he told an online newspaper in Germany, adding that three kids aged beetween 9 to 12 years of age were also among them.

Najafzada further added “I took the children and all other people into the underground and gave them water.”

He came out of the underground of the mall to inform the police regarding the incident and helped two injured people who were lying outside the mall by giving them water.

According to reports, Najafzada is living in the city of Munich and travelled to Germany from Afghanistan around three years ago.

He says he want to compensate for everything he has received as a refugee in Germany.