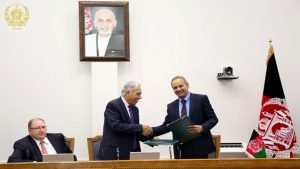 New grant agreements worth around 350 Million US Dollars were signed between Afghanistan and World Bank with an aim to support the reforms in Afghanistan.

The World Bank in a statement said the grant agreements were signed by Mohammad Humayon Qayoumi, Afghanistan’s acting Minister of Finance, and Shubham Chaudhuri, World Bank Country Director for Afghanistan.

The statement further added that the reforms are designed to improve efficiency and effectiveness in government operations for better revenue mobilization and service delivery. The new financing package supports reforms in the business environment, the energy sector, and land administration to promote economic growth and employment and reduce poverty for all Afghans.

$50 million for the Public-Private Partnerships and Public Investment Advisory Project, which aims to develop a pipeline of feasible private and publicly funded projects to further develop Afghanistan’s infrastructure, World Bank said, adding that the project will be financed by a $20 million grant from IDA and $30 million co-financing from ARTF.