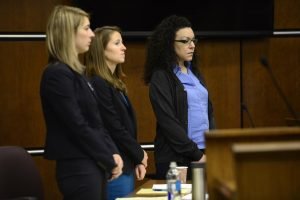 A woman has been sentenced to a total of 100 years in prison in the western US state of Colorado for attempted murder of unborn child, it has been reported.

The woman was found guilty during a court hearing for cutting a seven-month-old foetus from the womb of an expectant mother.

The convict, Dynel Lane, was found guilty by a jury for trying to kill Michelle Wilkins in March 2015 in the Denver suburb of Longmont and was also convicted of the unlawful termination of a pregnancy, according to Independent.

According to the report, the baby was later named Aurora who did not survive the attack.

The prosecutors had asked for the maximum sentence of 188 years for the brutal killing but judge Maria Berkenkotter said the sentence was justified by the brutality of the attack, which she described as performing a caesarean with a kitchen knife.

The 28-year-old victim was lured by Lane to her apartment by creating a Craigslist ad for maternity clothes and hit her over the head with a lava lamp and stabbed her in the neck with the broken glass.

She then cut Ms Wilkin’s abdomen, removed the unborn baby and left the victim for dead, according to the court hearing.

According to the prosecutors, the convict could not be charged with the murder of the baby because there was no evidence the fetus lived outside the womb.

Colorado Republicans introduced legislation that would have allowed such a murder charge, but it was rejected by Democrat politicians, according to Independent.

To date 38 US states have made the killing of a foetus a homicide despite objections from abortion-rights supporters.

The Canadian government has launched a new immigration program in order to attract more skilled...

U.S planning to relocate Afghan workers and families who contributed to its military missions

The U.S has announced to relocate those Afghan workers and their families who have worked with the...

U.S will deploy more troops for protecting Afghan capital from a Taliban takeover

Hundreds of more U.S troops will be deployed in Afghanistan to protect Kabul from a Taliban takeover,...

US plans to share up to 60 million AstraZeneca vaccine doses

United States is expected to send 60 million doses of AstraZeneva COVID-19 vaccine to other nations. The...