Will propose transitional govt in the event of a crisis due to elections: Noor 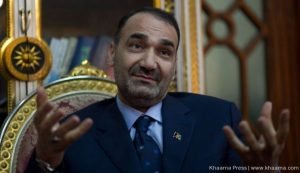 The Chief Executive of Jamiati Islami and member of the new political coalition, Coalition for the Salvage of Afghanistan, Ata Mohammad Noor says he will propose a transitional government in the event of a crisis due to the elections.

Noor made the remarks during a press conference late on Sunday in Mazari Sharif city as he expressed concerns regarding the rigging in upcoming elections.

Noor further added that the coalition will then propose a transitional government which will have a term for two to three years and would guarantee the preservation of the previous achievements.

Another member of the coalition Mohammad Mohaqiq also slammed the government and accused it for the attempts to monopolize the power.

The Afghan government officials have not reacted at the recent remarks of the coalition members so far.

This comes as efforts are underway to organize the parliamentary and district councils elections which are due for October this year.