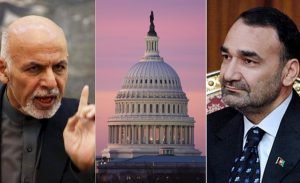 The US government has called on involved parties to resolve the tensions peacefully over the political leadership of the Balkh provincial government in North of Afghanistan.

“The White House has been closely following the current dispute over the governorship of Afghanistan’s Balkh Province.  The United States calls on the parties involved to quickly and peacefully resolve this dispute over the transfer of authority to a new governor.  The continued impasse benefits only terrorists and Afghanistan’s adversaries,” the White House said in a statement.

The statement further added “We believe that this dispute should be resolved in a way that gives Afghan citizens confidence that the appointment of a new governor strengthens security and the Government of National Unity’s ability to fulfill its obligations to them.  There is no space for violence in resolving this matter – or for any party to delay a resolution by putting their own interests before those of Afghanistan.”

“This is an issue for Afghans to decide within the framework of their constitution, and in accordance with the rule of law and the principle of equality before the law,” White House said.

This comes as a deadlock still persists between Noor and the government over the controversies surrounding his dismissal from the Balkh government.

The Office of the President, ARG Palace, announced nearly a month ago that President Ghani has approved the resignation of the Balkh governor Ata Mohammad Noor.