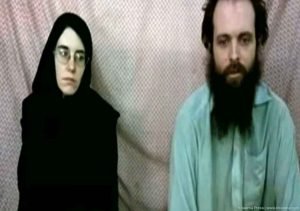 A Western couple missing in Afghanistan since 2012 has asked their governments to help free them and their child from captors.

The plead by Josh Boyle and Caitlan Coleman was made in a just released video to the Associated Press this week.

The family of a then-pregnant American has shared two videos it received of the couple.

The video shows Coleman is wearing a black head scarf and glasses along with her husband who is having a long beard. In the video, Ms. Coleman refers to her child, suggesting the couple had a baby while in captivity. The child, however, was not shown in images that were aired.

Boyle in one of the videos says, “We request our governments do what is necessary to bring the family back together to safety and freedom.”

According to Associated Press, the videos were emailed to Coleman’s father last July and September by an Afghan man who said he had ties to the Taliban.

Joshua Boyle, 30, and Caitlin Coleman, 28, were abducted while travelling in a mountainous region near the capital Kabul in late 2012.

This week’s release of the couple’s captivity footage follows the release of U.S. Sergeant Bowe Bergdahl.

The American soldier was freed after five years of captivity in Afghanistan as five Afghan Taliban prisoners were also released from the U.S. prison facility in Guantanamo Bay, Cuba.