Washington has no plan to leave Afghanistan: Grossman 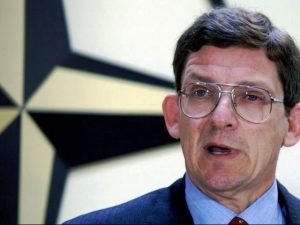 US special envoy for Afghanistan and Pakistan who is due to leave his post this week said he is unaware of plans for Taliban group’s power retention in Afghan government or to hand over a number of southern provinces of Afghanistan to Taliban group.

He also said that Washington has no plans to abandon Afghanistan.

Marc Grossman in response to questions regarding the fate of Afghanistan beyond NATO troops withdrawal from Afghanistan said United States will not leave the region. Washington has decided to remain in the region to prevent the similar incidents that took place in 1989 and 1990.

He said Chicago and Tokyo summits and also strategic pact between Afghanistan and Pakistan guarantees long term commitment of Washington and International Community to Afghanistan. United States and other NATO member countries have vowed to assist billions of Dollars to Afghan army and police forces in the coming years.

Afghanistan and United States are also committed to long term strategic cooperation which represents the will of the two nations for long term ties, Grossman said.

Marc Grossman pointing towards the ongoing security talks between the two nations said he was confident that Afghans will consider the sacrifices United States in Afghanistan.

This comes as unconfirmed reports suggest that Afghanistan and western nations are looking to include Taliban group in Afghan governance and hand over a number of southern provinces to Taliban however Marc Grossman has said that he has not seen such a document to prove the reports.

He said, “There is no stability in Afghanistan but more works have been done during the past two years for the foundation of peace talks between the parties involved in Afghan war. We want Afghan-led peace talks for the Afghan people.”

Grossman also said that Afghan and Pakistani officials have agreed on a program to hold peace talks with the Taliban group. He did not disclose further information regarding the program and also did not say if Washington supports the agreement between Kabul and Islamabad.

One thought on “Washington has no plan to leave Afghanistan: Grossman”