UN Security Council to Hold a Session on Afghanistan Today 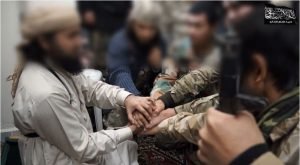 The Islamic Movement of Uzbekistan (IMU) militant group has released a new video which purportedly shows the beheading of an Afghan soldier while the group pledges allegiance to the Islamic State of Iraq and Syria (ISIS) terrorist group.

The group is actively operating in northern provinces of Afghanistan and was previously operating under the shadow of the Taliban group.

However, a militant identified as Sadullah Urgenji appears in the video and distances the group from the Taliban group insisting that the Taliban supreme leader Mullah Omar is no longer viewed as their leader, Radio Free Europe (RFE) reported.

Urgenji says Mullah Omar has not been seen for some 13 years and, “according to Shari’a,” can no longer be leader.

Urgenji ALSO said his group was recognizing the authority of the Abu Bakr al-Baghdadi, leader of the Islamic State group.

According to Urgenji the Afghan soldier was beheaded since numerous female IMU members were captured by the Afghan security forces in Faryab province recently.

He said a group of 30 Afghan soldiers have been taken hostage by Islamic Movement of Uzbekistan militants in retaliation for the detention of the female IMU members.

Urgenji warned that more Afghan soldiers will be beheaded unless the Afghan government does not consider their demand to swap prisoners.

The Taliban officials announce the arrival of Pakistani humanitarian aid for the victims of the...