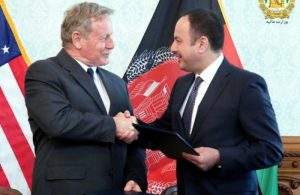 “These agreements are a testament to the enduring partnership between the American and the Afghan people. Over the next 12-months, this funding will enable us to implement projects and deliver valued services to our citizens across Afghanistan,” said Afghanistan’s Minister of Finance Eklil Hakimi.

Mr. Hakimi went on to say, “These are some of the first practical steps we are taking to deliver on our commitments and the pledges that were made at the Brussels Conference to help Afghanistan achieve self-reliance.”

USAID Director Herbert Smith said the documents just signed begin to implement the multi-year pledge that the United States made at the recent Afghanistan donor’s conference in Brussels, where the U.S. underscored its enduring commitment to the people of Afghanistan and its National Unity Government.

“This document reaffirms U.S. determination to support the government of Afghanistan in efforts to strengthen Afghanistan’s institutions, maintain gains in education and health services achieved in recent years, and improve the welfare of the Afghan people,” Herbert said.

The funds obligated under the agreements will support programs that achieve strategic development objectives, including a thriving economy led by the private sector, a democratic government with broad citizen participation, and a better educated and healthier Afghan population.