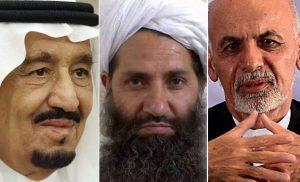 The United States welcomed a statement released by the Saudi King Salman bin Abdul Aziz regarding the Afghan ceasefire and reconciliation.

Heather Nauert said “The United States welcomes Saudi Arabia’s recent call for an extension fo the ceasefire between the Government of Afghanistan and the Taliban.”

She said the United States echoes the call for a new era of tolerance and reconciliation, renouncing violence, and preserving the lives of innocent people.

“This reflects Saudi Arabia’s prominent role in combating terrorim and furthers our mutual goal of regional peace and stability,” she added.

The State Department spokesperson also added in her statement that “We call on parties to reciprocate a ceasefire extension and engage in formal peace negotiations.”

This comes as the King of Saudi Arabia Salman bin Abdulaziz earlier had demanded the extension of the ceasefire by all parties involved in the conflict in Afghanistan.

Welcoming the announcement of ceasefire by the Taliban and Afghan government during Eid Al-Fitr, King Salman said he hopes that the truce would be renewed and built upon for a longer period so that all parties could work together to achieve peace for the Afghan people.

King Salman further added that the Afghan people, who had suffered so much from the horrors of war were looking forward to turn the page of the past and to open a new one based on tolerance and reconciliation, renounce violence and preserve the lives of innocent people.