US to compensate victims of Kundoz hospital bombing with “condolence payments” 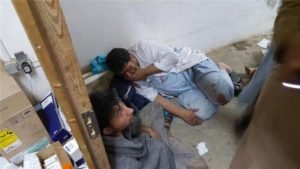 Pentagon spokesman Peter Cook on Saturday announced compensation of “condolence payments” to the wounded victims and the families of 22 people killed in a US airstrike that hit a hospital of Doctors Without Borders/Médecins Sans Frontières (MSF) in northern Kundoz province.

Peter said in a statement that the compensation will be handled through the existing Commanders’ Emergency Response Program in Afghanistan, and if necessary additional authority will be sought from Congress.

Earlier this week, President Obamba apologized to the head of the Doctors Without Borders after NATO and U.S. forces commander in Afghanistan said that the airstrike was a mistake.

In his testimony to the Senate Armed Services Committee last week, Gen. John Campbell said that the decision to conduct the airstrike was made within the US chain of command.

“To be clear, the decision to provide aerial fires was a US decision made within the US chain of command,” he said, adding that “A hospital was mistakenly struck. We would never intentionally target a protected medical facility.”

Including 12 staffers of MSF, 22 people were killed and 37 others wounded in the airstrike.