US soldiers with genital wounds expected to get penis transplant 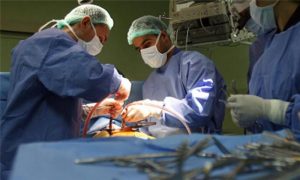 Doctors in United States are expecting to perform a rare penis transplant surgery on a young soldier who sustained horrific genital injury in Afghanistan in an Improvised Explosive Device (IED) explosion, it has been reported.

The surgery which is considered as unprecedented in United States is expected to be performed in the next couple of months by surgeons in Johns Hopkins University School of Medicine in Baltimore, according to a report published in New York Times.

With only two transplants reported globally so far, including a successful and failed surgery, the doctors are expecting to develop urinary function, sensation and, eventually, the ability to have sex by attaching the organ which will come from a deceased donor.

The decision to perform the surgery comes as nearly 1,367 US military service members have sustained genital wounds while serving in Iraq and Afghanistan from 2001 to 2013.

According to the Department of Defense Trauma Registry, the wounds include partial and total dismemberment of the penises or testicles and the victims were all reported to be under 35 years old who sustained injuries mainly by homemade bombs, commonly called improvised explosive devices, or IEDs.

At least 60 transplants are expected to be performed after doctors were given permission by Johns Hopkins with the results to be monitored by the university as the surgery is considered as experimental and the decision to make the surgery standard will be taken afterwards.

Bleeding, infection and the possibility that the medicine needed to prevent transplant rejection will increase the odds of cancer are said to be among the risks of the surgery.

According to the doctors, only the penis will be transplanted, not the testes, where sperm are produced, which mean that the recipient will have his own genetic child and not the offspring of the donor if he becomes a father.

However, the case will be vice versa with the recipients who will receive both the penis and testicle.