US in contact with Afghans regarding the Hotel attack probe: Tillerson 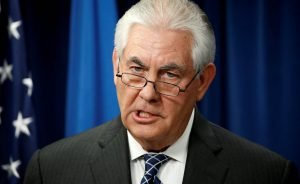 The US Secretary of State Rex Tillerson has said the United States is contact with the Afghan authorities regarding the investigations into the attack on Intercontinental Hotel in Kabul as he strongly condemned the killing of the innocent civilians in the attack.

“The United States strongly condemns yesterday’s attack at the Intercontinental Hotel in Kabul. We mourn all those who lost their lives in the attack, whether Afghans or citizens of other countries. We offer our deepest condolences to the families and friends of those who were killed and wish for the speedy recovery of those wounded,” he said.

Tillerson further added that the United States applauds the Afghan National Defense and Security Forces for their bravery in responding to the attack.

“We are in contact with Afghan authorities regarding their investigation of the incident. We have seen the Taliban’s claim of responsibility and condemn terrorist groups for their violent campaign against Afghan and foreign personnel working to improve Afghanistan,” he added.

He said the United States stands with the government and people of Afghanistan. We remain firmly committed to supporting Afghan efforts to achieve peace, security, and prosperity for their country.

“Violence like what we witnessed yesterday has no place in Afghanistan, or anywhere else in the world,” Tillerson said.