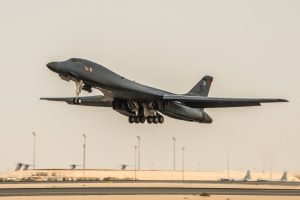 The US Military says a B-1B Lancer aircraft was used in the latest airstrike carried out on drug facilities amid ongoing air campaign to eliminate the financial sources of the group, mainly coming from the drugs business.

A B-1B Lancer aircraft from the 34th Expeditionary Bomb Squadron here bombed multiple Taliban narcotics production and storage facilities in Afghanistan during a mission on May 18, according to a report by 379th Air Expeditionary Wing.

The 34th EBS BONEs deployed their largest amount of weapons on narcotics facilities since the squadron’s reintroduction in the U.S. Air Forces Central Command’s area of responsibility in April.

This mission was part of realigning airpower from Operation Inherent Resolve, and elsewhere, to support increased activity in Afghanistan and bolster Afghan National Defense and Security Forces capabilities.

“Increased airpower supports a deliberate air campaign designed to degrade the Taliban’s primary means of funding its operations — narcotics production,” said Capt. Mark Olme, a 34th EBS pilot. “These strikes will mitigate the Taliban’s ability to fund insurgent operations that kill innocent Afghan civilians and strengthen the ANDSF’s ability to fight and win on the ground.”

Since November, more than 75 strikes against narcotics processing and storage facilities and stockpiles have resulted in the loss of tens of millions of dollars for the Taliban. According to Frank Mercurio, 34th EBS chief of weapons and tactics, the intent is to go after the root of the problem.