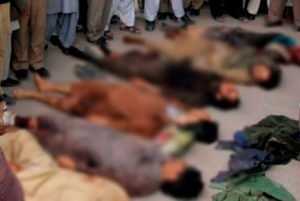 The United States Forces for Afghanistan (USFOR-A) confirmed the death of a top Taliban leader Quari Tayib in northeastern Takhar province of Afghanistan.

“U.S. Forces-Afghanistan confirmed Quari Tayib, once known as the Taliban Shadow Governor of Takhar Province, was killed in an airstrike in Archi District, Kunduz, Afghanistna on Apr. 17,” a statement by USFOR-A said.

The statement further added that rhe strike was part of ongoing efforts to deny Taliban freedom-of-movement in the area.

“According to USFOR-A, Tayib had been a target-of-interest since 2001 and was directly responsible for the deaths of U.S. service members in Afghanistan,” the statement added.

USFOR-A also added that rhe strike targeted a compound Tayib owned and used for insurgents in the area. Eight additional Taliban fighters were killed in the strike.

“U.S. Forces took every precaution to preent civilian casualites. No other casualties or damage were associated with this strike,” the statement said.

The provincial police commandment in Kunduz confirmed the death of Quari Tayib last week but stated that he was the deputy shadow governor of the group for Takhar province.