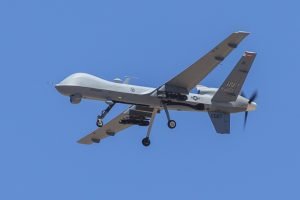 The US forces carried out a series of airstrikes on ISIS hideouts in eastern Kunar province of Afghanistan, leaving at least two militants dead.

The 201st Silab Corps of the Afghan Military in the East said the airstrikes were carried out using unmanned aerial vehicles in the vicinity of Suki district.

The source further added that preliminary reports indicate at least two members of the terror group were killed during the airstrikes.

The local residents did not suffer any casualty during the airstrikes, the 201st Silab Corps added.

The anti-government armed militant groups including ISIS Khurasan loyalists have not commented regarding the report so far.

Kunar is among the relatively volatile province in East of Afghanistan where the anti-government armed militant and terrorist groups including Taliban, ISIS, and Al Qaeda operatives are actively operating in some of its districts and often carry out insurgency activities.

The latest airstrike in Kunar has been carried out amid ongoing counter-terrorism operations against the militant and terrorist groups in the restive provinces of the country.

The UN Refugee Agency released a statement on Wednesday,...

Afghanistan lies in a seismically active zone, and earthquakes...