US drones target ISIS gathering in East of Afghanistan 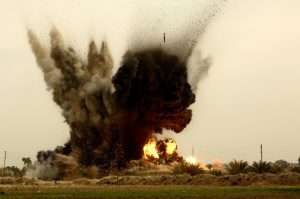 The US unmanned aerial vehicles on Sunday targeted a gathering of the militants affiliated with the Islamic State of Iraq and Syria (ISIS) terrorist group in eastern Nangarhar province of Afghanistan.

According to the officials of the 201st Silab Corps of the Afghan army, the airstrikes were carried out in the vicinity of Deh Bala district.

The officials further added that several militants of the terror group had gathered in meeting when the US drones targeted them, leaving at least ten militants dead.

The Silab Corps officials also added that eight foreign militants were among those killed in the airstrikes.

In the meantime, the Afghan forces also conducted an operation in Ghani Khel district during which at least ten insurgents were killed and two others were detained, the officials added.

Militants belonging to the Taliban group are mostly operating in the vicinity of Ghani Khel district while both Taliban and ISIS insurgents are operating in Deh Bala district.

This comes as the air and ground operations are underway against both the groups in the restive parts of Nangarhar province in a bid to suppress the insurgents from their attempt to expand foothold in this province.