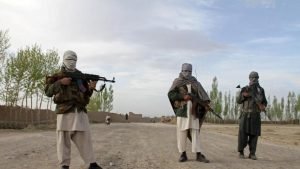 The US forces in Afghanistan conducted a drone strike in eastern Nangarhar province of Afghanistan, leaving at least two leaders of the group dead.

The provincial government media office in a statement said Tuesday that the airstrike was carried out in the past 24 hours in Bati Kot district.

The statement further added that the militants were targeted in Ghandi Kalai area of the district.

The Taliban leaders killed in the airstrike have been identified as Faisal and Obaidullah, the statement said, adding that a motorcycle of the militants and some weapons were also destroyed.

In the meantime, the provincial government said a militant affiliated with the ISIS terrorist group was killed during the clashes with the security forces in Haska Mina district.

This comes as the Afghan security forces are busy conducting counter-terrorism operations against the IS and other insurgent groups in this province.

The US forces based in Afghanistan also support the Afghan forces in their fight against the terrorist groups and often carry out airstrikes to suppress the insurgency of the terror groups.

The increased raids by the Afghan and US forces followed rampant activities by the IS and other groups to expand their insurgency in this key eastern province.