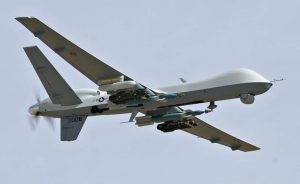 At least four suspected militants were killed following a US drone strike in tribal region of Pakistan on Sunday.

According to Pakistani intelligence officials, the airstrike was carried out along the Durand Line in South Waziristan.

The officials further added that a militants compound in Wana was targeted by the US drone which left at least four people including two Arab militants and two Pakistani militants dead.

This comes as at least ten suspected militants were killed following a US drone strike in North Waziristan tribal region of Pakistan early Wednesday.

The drone strikes in Pakistan resumed after almost six months gap in June when two successive drone strikes on June 11 reportedly killed around 16 people in Miranshah.

U.S. drone strikes are widely unpopular in Pakistan, where many consider them a violation of the country’s sovereignty that also killed civilians.

But American officials believe they are a vital weapon in the war against militants.