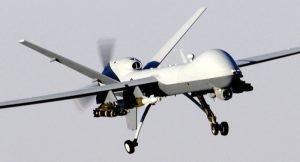 At least two members of the Islamic State of Iraq and Syria (ISIS) terrorist group were killed in an airstrike of the US forces in eastern Nangarhar province of Afghanistan.

The provincial police commandment in a statement said unmanned aerial vehicles belonging to the US forces targeted the loyalists of the terror group in Haska Mina district.

The statement further added that the militants were targeted in the vicinity of Awghaz area of the district on Sunday, leaving two of them dead.

Nangarhar is among the relatively calm provinces however the Taliban and ISIS militants have increased their insurgency activities in some its remote parts during the recent years.

At least fourteen militants affiliated with the terror group were killed in an airstrike conducted in this province on Saturday.

The militants were targeted in the vicinity of Margha area of Mamand Dara of Achin district, the statement said, adding that the two ISIS leaders killed in the raid have been identified as Asadullah Orakzai and Shakirullah Kunari.