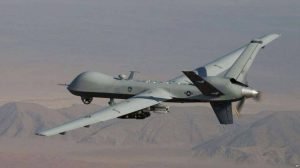 At least 15 ISIS militants were killed in the latest drone strike of the US forces in eastern Nangarhar province of Afghanistan.

The provincial government media office in a statement said the latest airstrike was carried out Bandar area of Achin district.

The statement further added that fifteen ISIS militants were killed and their weapons, ammunition, and explosives cache was destroyed in the air raid.

In the meantime, at least two ISIS militants hailing from Orakzai Agency were killed in a separate operation in Haska Mina district, the statement added

According to the provincial government, the local residents and security personnel have not suffered any casualties during the operations.

The anti-government armed militant groups including the ISIS militants have not commented regarding the reports so far.

The provincial government had earlier said a local Taliban leader identified as Katib was killed in Chaparhar district late on Sunday night by ISIS militants.

A statement by the Nangarhar governor’s office stated that two other Taliban group members, apparently fighters of Katib, were also killed by the ISIS militants.