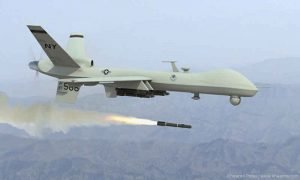 Pakistani intelligence sources have confirmed that the a US drone targeted a compound in Dattakhel area of North Waziristan.

The officials have further added that the compound was totally damaged following the airstrike, leaving at least 18 suspected militants dead.

The identities of those killed in the airstrike have not been ascertained so far.

At least six people were killed following a drone strike in the same region last week.

The drone strike comes as Pakistani military is engaged in a major military offensive against the insurgent groups in North Waziristan.