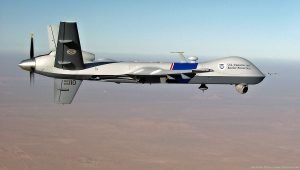 Pakistani intelligence sources confirmed that the airstrike was carried out early Wednesday in Miramshah Tehsil of North Waziristan.

The sources further added that a compound and a vehicle in Dargah Mandi village were targeted by at least six missiles fired by a drone.

Sources also added that the identities of those killed in the strikes have not yet been ascertained.

This was the third airstrike carried out by US drones in a month time in North Waziristan where  a comprehensive military operation launched by the Pakistani army against foreign and local terrorists is also under way.

The Pakistani army launched its long-awaited major operation ‘Zarb-i-Azb’ in the tribal region a week after an attack on the airport in Karachi, deploying troops, tanks and jets to the area in the crackdown on the Taliban and other militants.