Iran blames US for chaos in Afghanistan and West Asia 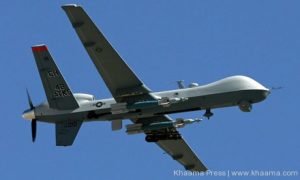 According to reports, at least four suspected militants including a senior Taliban leader were killed following a US drone strike in eastern Kunar province of Afghanistan.

Mr. Syed Khel further added that Taliban district chief for Ghaziabad were among the four suspected militants who were killed in US drone strike.

He said the airstrike did not incur any casualties to local residents. Taliban militants group yet to comment regarding the incident.

This was the second US drone strike in eastern Kunar province of Afghanistan in less than a week period. At least 6 suspected militants were killed following a drone strike in Chapa Dara district last Tuesday.

The drone targeted a group of militants who were planning to attack security check posts of the Afghan security forces.