US drone strike kill 4 militants in West of Afghanistan 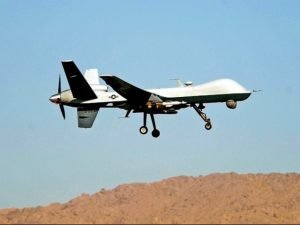 At least 4 militants were killed in a drone strike conducted by the US forces in western Farah province of Afghanistan, local officials said Sunday.

He said a hideout of the militants was targeted in the airstrike a commander of the group was likely among those killed.

Farah is among the relatively volatile provinces in western Afghanistan where anti-government armed militant groups are actively operating in a number of its remote districts.

The US forces in Afghanistan have stepped up airstrikes against the militant groups during the recent months.

The Obama administration granted broader role to the US forces based in Afghanistan to target the loyalists of the Islamic State of Iraq and Syria (ISIS) terrorist group as well as the Taliban militants.

The broader role was granted amid deteriorating security situation in the country and following concerns that the militant groups are attempting to expand insurgency in the country.