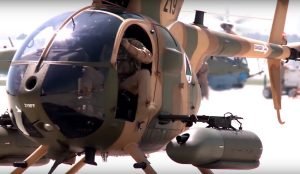 The United States has completed the delivery of 5 more combat helicopters to the Afghan Air Force in a bid to improve the capabilities of the Afghan National Defense and Security Forces (ANDSF).

Each of the newest helicopters is capable of firing rockets or .50-caliber machine guns. These newest aircraft provide an expanded capability for the AAF to support the Afghan National Army’s ground fight.

This comes as the Afghan Air Force (AAF) received five new combat helicopters from the United States in mid-June this year.

According to the MD Helicopters website, “The MD-530F’s high altitude lift capability is achieved by main-rotor blades six inches longer than the MD 500E. The tailboom is extended eight inches and the tail rotor blades have been lengthened to provide increased thrust and directional control at high altitudes.”

At a price of about $5 million each, the MD-530 provides both an economical and critical air-to-ground capability, enabling Afghan pilots to engage the enemy. As with all major systems procured for the AAF, the MD-530s were purchased using the Afghan Security Forces Fund.