US blames Pakistan for the failures in Afghanistan, claims Hafiz Saeed 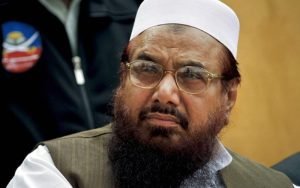 The leader of Lashkar-e-Tayyiba Hafiz Saeed claims that the United States blames Pakistan for its failures in Afghanistan while accusing Washington of using ISIS as a weapon against the Muslim countries.

Saeed who is also the leader of Milli Muslim League has said that “Daesh is a dangerous weapon created by the US which it is using against the Islamic world.”

He has also warned that if the Kashmir cause was abandoned, Pakistan would have to face increasingly difficult challenges, according to Pakistan Daily.

Saeed was designated by the United Nations under UNSCR 1267 in December 2008 following the November 2008 Mumbai attack in which 166 people, including six American citizens, were killed. LeT and several of its front organizations, leaders, and operatives remain under both State Department and Treasury Department sanctions.

Since 2012, the United States has offered a U.S. $10 million‎ reward for information that brings Saeed to justice.

Saeed was released on Friday morning from house arrest after a court rejected to extend his detention on Wednesday.

In reaction to his release, the White House said “Saeed’s release, after Pakistan’s failure to prosecute or charge him, sends a deeply troubling message about Pakistan’s commitment to combating international terrorism and belies Pakistani claims that it will not provide sanctuary for terrorists on its soil.”