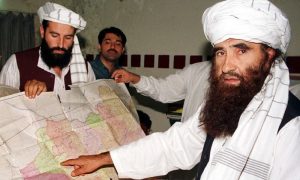 A commander of the Haqqani terrorist network has reportedly been targeted in a US airstrike in tribal regions of Pakistan.

According to the local officials, the airstrike was carried out late on Monday night in the vicinity of Hangu district located in northwestern parts of Pakistan.

A security official quoted by the Mashal Radio of Radio Liberty has said said on June 13 that the commander, identified as Abubakar, died in an overnight strike in the Speen Tal area of the Hangu district.

A resident of Dewal village, Behram Khan, said three more people were injured in the strike, including a boy.

Khan said Abubakar was from Afghanistan’s Khost Province and that his original name was Omar.

The latest airstrike if confirmed by the US officials, has taken place days after the Afghan officials blamed the network for a series of deadly attacks in capital Kabul which left more than 150 dead and more than 400 others wounded.