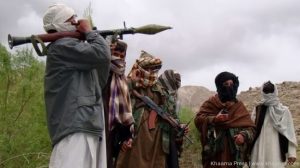 According to local authorities in eastern Logar province of Afghanistan, at least nine Taliban militants were killed following a US airstrike in this province.

The officials further added that the airstrike was carried out in Pul-e-Alam district on Wednesday night.

He said at least eight Pakistani Taliban militants and seven Afghan militants were killed in a separate operation at Baraki Barak district.

According to Mr. Abdul Rahimzai a senior Taliban commander Mohammad Ismail was also killed during the operation.