US airstrike kill 7, injure 3 in Miranshah 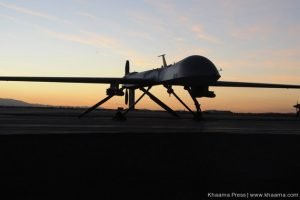 According to Pakistani security officials, at least seven people were killed and three others were injured following a US drone strike in northwest Pakistan late Friday.

This was first such an attack since the swearing-in of Nawaz Sharif as prime minister this week.

The missiles hit a compound in Shokhel village, more than 100 kilometres (60 miles) southwest of Miranshah, the main town of North Waziristan tribal district which is known as a stronghold of Taliban and Al-Qaeda-linked militants.

Many Pakistanis oppose U.S. drone strikes because they say the strikes kill large numbers of innocent civilians — something the U.S. denies — and end up breeding more extremism by those seeking retribution.

The country’s new prime minister, Nawaz Sharif, who was sworn in on Wednesday, has lashed out against the U.S. drone program.

During his campaign, he sometimes criticized the U.S. and its policy of using drones to kill militants in the tribal areas of Pakistan. Speaking to parliament earlier this week, he once again called for an end to the drone policy.