US airstrike kill 3 ISIS militants in East of Afghanistan 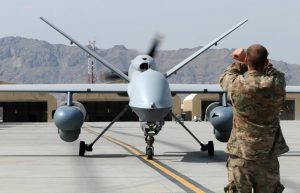 At least three loyalists of the Islamic State of Iraq and Syria (ISIS) terrorist group were killed in an airstrike conducted by the US forces in East of Afghanistan.

The provincial police commandment said the militants were targeted in Haska Mina district after the US drones carried out an air raid in Langari Gand area.

The officials further added that the local residents did not suffer any casualties in the airstrike.