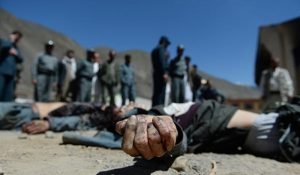 At least two loyalists of the Islamic State of Iraq and Syria (ISIS) terrorist group were killed in an airstrike conducted by the US forces in Afghanistan.

The provincial security officials said the airstrike was carried out late on Wednesday evening in Achin district.

The officials further added that the airstrike did not incur any casualties to the local residents.

According to the officials, the militants were targeted by the unmanned aerial vehicle in Pekha area of Achin district.

In the meantime, the Afghan forces arrested at least three loyalist of the terror group during an operation in Haska Mina district.

The local officials said the militants were arrested in Ghalni area based on intelligence information provided to them.