US airstrike kill 11 ISIS loyalists in Nangarhar province of Afghanistan 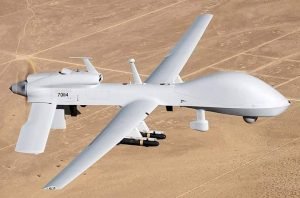 At least 11 loyalists of the Islamic State of Iraq and Syria (ISIS) terrorist group were killed in an airstrike in eastern Nangarhar province of Afghanistan.

The provincial police commandment in a statement said the airstrike was carried out by the US forces based in Afghanistan, using an unmanned aerial vehicle to target the loyalists of the terror group.

The statement further added that a Dshk heavy machine belonging to the loyalist of the terror group was also destroyed when they were targeted in Achin district.

The local residents did not suffer any casualties in the airstrike, the provincial police commandment added.

The loyalists of the terrorist group have not commented regarding the report so far.

ISIS loyalists and militants belonging to the other insurgent groups are actively operating in a number of the remote districts of Nangarhar province including the restive Achin.

The Afghan forces and US forces based in Afghanistan are regularly targeting the ISIS loyalists and other militant groups.

The US forces based in Afghanistan have increased airstrikes against the militants after the Obama administration granted broader role to them amid deteriorating security situation in Afghanistan.