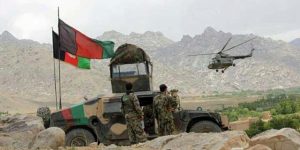 After months of intelligence gathering and planning, the operation began in the evening hours of Oct. 7 and ended on Oct 11 in which U.S. carried out 63 precision airstrikes while Afghan forces engaged in several battles on the ground against al-Qaeda networks at two related sites.

“This is one of the largest joint ground-assault operations we have ever conducted in Afghanistan,” said Brig. Gen. Wilson Shoffner, a U.S. spokesperson in Afghanistan. “We struck a major al-Qaeda sanctuary in the center of the Taliban’s historic heartland. This significant operation is a testament to the professionalism and expertise of our Afghan partners and demonstrates the growing capability of the Afghan security forces.”

“The goal of the operation was to degrade the terrorist network in Afghanistan,” Shoffner said. “Aside from validating the accuracy of our intelligence, we were able to seize a large amount of data and weapons.  Based on the digital media equipment collected from the site, it also appears that this was the location of a large media cell.”

“The enormous success of this operation validates our ongoing campaign. Working with, by, and through our Afghan partners, we’re building their capabilities while we fight our common enemies,” said Gen. John F. Campbell, Commander for U.S. Forces in Afghanistan. “That’s why our strategic partnership here is so important. We continue to protect our fellow Americans at home by fighting al-Qaeda here. I couldn’t be prouder of our brave U.S. servicemen and women and their Afghan counterparts. It’s because of their extraordinary efforts that terrorists here haven’t been able to attack our homeland in over 14 years.”

General Dawlat Waziri, a spokesman for the Ministry of Defense told a press conference on Monday that 234 militants were killed Shorabak operation.