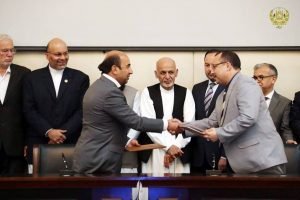 A contract for the urban water supply for Kabul city was signed in the presence of President Mohammad Ashraf Ghani.

The contract worth $11.141 million will be supported by the United States Agency for International Development (USAID).

The State Enterprise for Water Supply and Canalization and Mumtza Group signed the contract in ARG Palace today.

The Office of the President, ARG Palace, said the contract#1 for urban water supply is part of a major water project which is funded and administered by the German Development Bank.

According to ARG Palace, the United States Agency for International Development and the French development bank also contribute in the funding of the project.

With the completion of the first phase of the project, around 10 thousand residential houses will receive pure drinking water on 24 hour basis.

The contract for the first phase of the urban water supply for Kabul city has been signed amid population influx in the capital that has increased the demand for the clean drinking water besides the city was previously facing issues of housing and other urban issues.