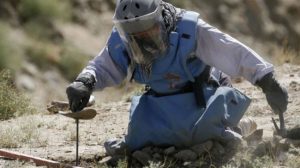 A group of unidentified gunmen have kidnapped 15 de-miners in western part of Afghanistan, an official said on Saturday.

The provincial governor’s spokesperson confirmed the incident saying that it took place in Shabash area.

Jailani Farhad added that security agencies have begun a search operation in the area to locate and release the hostages.

According to Farhad, local community elders are also assisting security forces in finding the abductees.

So far no group has claimed responsibility for the abduction.

Western Afghanistan which had better security is now going through some of its worst days.