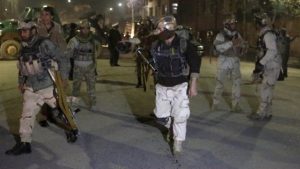 The UN Security Council has strongly condemned the deadly terrorist attack in the vicinity of Spanish embassy in capital Kabul that left eight people killed and nine others wounded.

According to a statement released by the United Nations Assistance Mission in Afghanistan (UNAMA) on Saturday, the members of the Security Council reiterated their serious concern at the threats posed by the Taliban, Al-Qaida, ISIL affiliates, and illegal armed groups to the local population, national security forces, and international presence in Afghanistan.

Last night’s attack begun with a suicide bomb blast at around 6 pm after which other terrorists started to exchange gunfire with security forces.

It ended around 4 am on Saturday after all three gunmen were killed in the gun battle.

Kabul Police confirmed the death of two foreigners, five policemen and a civilian.

Taliban claimed responsibility for the attack.