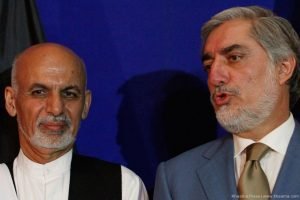 “I was here to reinforce the message to the two candidates, on behalf of the Secretary-General, to please move forward,” Mr. Feltman said after his separate meetings with the two candidates. “And if there are things we can do to help them, we’re willing to do it; but this, obviously, is an Afghanistan decision about Afghanistan’s future.”

“I will report back to the Secretary-General that in both cases, Dr. Ghani and Dr. Abdullah, reaffirmed their commitment to try to get to a political agreement on a national unity government,” the UN official added.

The Under-Secretary-General stated that it is important, from the UN perspective, that the two candidates proceed with the political agreement for the government of national unity as “this is the best way to move forward,” in addition to following through on their public commitments to accept the audit results, which should be announced in the next few days.

Mr. Feltman stressed that the United Nations intends to remain an active and supportive partner of Afghanistan through its political and security transitions and well beyond. “We want to find new opportunities to help support the vision of a unified, secure, stable, and prosperous Afghanistan,” he said.

His visits comes as the election process was once again put on the brink of collapse after Dr. Abdullah announced his team will not accept the outcome of the election.

The remarks by Abdullah was followed after he met his rival Dr. Ashraf Ghani Ahmadzai on Monday but the talks ended with no result to form a national unity government.