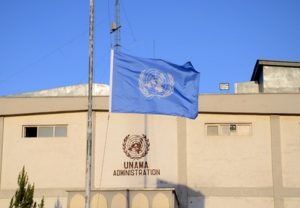 The United Nations Human Rights team has launched an investigation regarding the possible casualties of the civilians during a deadly airstrike in Kunduz province.

The United Nations Assistance Mission in Afghanistan (UNAMA) said the mission is actively looking in to disturbing reports of serious harm to civilians yesterday from airstrike at Dashti Archi, Kunduz.

According to UNAMA, the Human Rights team on ground establishing facts. “All parties reminded of obligations to protect civilians from impact of armed conflict,” the UN mission said.

The 209th Shaheen Corps of the Afghan military in the North says a large gathering of the top Taliban leaders was targeted in Bajauri area of the district.

The Shaheen Corps said their latest finding indicate that a member of the Quetta Council of the Taliban Qari Biryan was killed along with several others in the airstrike.

According to the Shaheen Corps, the other Taliban leaders killed in the airstrike have been identified as Qari Hamidullah Taliban’s military commission chief for Kunduz, Mawlavi Shahidullah, a member of the military commission of the Taliban, Mawlavi Mumtaz, one of the instructors of the Red Unit of Taliban.

Other Taliban leaders killed in the airstrike have been identified as Qari Amad and Abdul Malik who were killed along with at least 17 others, the Shaheen Corps added.

However, reports indicate that around 70 people were killed and dozens more were wounded in the airstrike amid fears several civilians are among those killed.