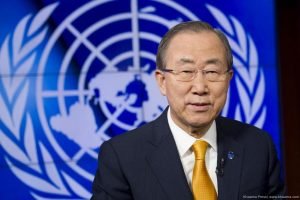 The UN Secretary General Ban Ki-moon praised the government of Afghanistan for technical and security preparations and urged all Afghan men and women to fully participate in the vote on April 5.

United Nations Assistance Mission in Afghanistan (UNAMA) said, the Secretary-General is encouraged by the technical and security preparations and broad public engagement for Afghanistan’s upcoming Presidential and Provincial Council elections. These are extremely important elections for the country.

UNAMA following a statement said, the UN Secretary General urges all Afghan men and women to participate in the vote on 5 April and to take this opportunity to have their say on the future direction of their country.

Ban Ki-moon reiterated that deliberate attacks against civilians are serious violations of international humanitarian law and that those responsible will be held accountable.

“The Secretary-General welcomes Afghan ownership of the electoral process and calls upon Afghan institutions to discharge their responsibility to deliver credible, inclusive and transparent elections,” UNAMA said.

Ban Ki-moon also urged the candidates and their supporters to show patience and respect for electoral institutions and processes, while the ballots are counted and complaints adjudicated, and to abide by the results of the polls.