UK to increase troops from 450 to 500 in Afghanistan 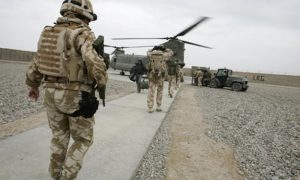 The United Kingdom will deploy additional 50 troops to Afghanistan to increase the number from the existing 450 to 500 soldiers.

The British officials have said UK will also delay the departure of the last remaining forces in the country into 2017.

“The aim is to build the capacity of the Afghan national defence and security forces,” the British prime minister’s
deputy spokesman has said.

The official further added that the British troops will serve in the framework of the NATO-led Resolute Support mission to train, advise and assist the Afghan forces.

“It is a Nato mission,” he said. “It’s not mission creep. They are not engaged in a combat capacity. They are engaged in training and mentoring.”

This comes as the US Department of Defense announced Friday that President Barack Obama has decided to keep 8,400 troops in Afghanistan through January 2017.

“As president and commander-in-chief, I have made it clear that I will not allow Afghanistan to be used as safe haven
for terrorists to attack our nation again,” Obama said. “I strongly believe that it is in our national interests, especially after all the blood and treasure we’ve invested in Afghanistan over the years, that we give our Afghan partners the very best opportunity to succeed.”

The Department of Defense said Obama made the decision after consulting with the new U.S. commander in Afghanistan, Army Gen. John Nicholson; his national security team; Congress and allies.