U.S. soldier killed, another wounded in East of Afghanistan 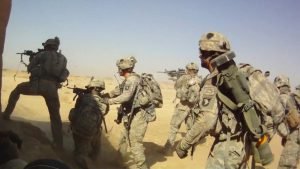 A U.S. soldier was killed and another soldier sustained injuries in an apparent insider attack in East of Afghanistan.

“One U.S. service member was killed and another wounded during an apparent insider attack in eastern Afghanistan, Sept. 3,” the NATO-led Resolute Support Mission said in a statement.

“The sacrifice of our service member, who volunteered for a mission to Afghanistan to protect his country, is a tragic loss for all who knew and all who will now never know him,” said Resolute Support and U.S. Forces – Afghanistan Commanding General Scott Miller. “Our duty now is to honor him, care for his family and continue our mission.”

No further details have been given regarding the exact location of the incident but the alliance added that the wounded service member is in stable condition.

The U.S. forces are engaged in counter-terrorism operations against the ISIS and other terrorist groups in eastern Nangarhar and some other eastern provinces.